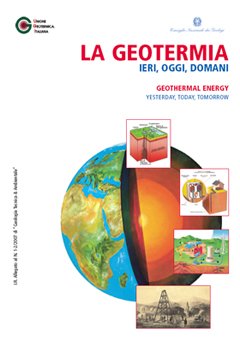 Strong development of geothermal energy in Italy is imperative to:
– minimize dependence on imported fuels,
– curb the balance-of-payments deficit,
– mitigate the environmental impact of greenhouse gases.

(Warning: the file has 18MB size, it's strongly recommended a broadband connection)

The “Consiglio Nazionale dei Geologi” (CNG – Italian National Council of Geologists) and the “Unione Geotermica Italiana” (UGI - Italian Geothermal Union) have recently signed a frameagreement on geothermal energy. The chief purpose of the agreement is to undertake joint efforts with a view to disseminating knowledge about and promoting development of geothermal energy in Italy. Indeed, the two Organizations are well aware of the risks of an unprecedented world energy crisis which may arise from the following main factors:

- continuously increasing energy consumption, not only in the western world but also in developing countries (especially China and India) whose energy demand is growing at a pace much faster than the world average;
- progressive and accelerated depletion of known reserves of liquid and gaseous hydrocarbons;
- frequent political crises in some regions of the world causing, among others, repeated increases in oil and natural gas prices, which will hardly drop back to the levels of a few years ago.

Under these circumstances, efforts within the scientific, technological and industrial communities should be intensified so as to step up the growth and maximize the utilization of indigenous energy resources, especially renewable and unconventional ones. Prominent among the latter are geothermal resources, which are largely available in our country and suitable for a wide range of uses, from electricity generation to direct use for air conditioning and industrial applications.

UGI and CNG have thus decided to launch a joint campaign, which is intended to make geother- mal energy known not only to the Italian technical community, but also and above all to public Institutions engaged in energy planning and environmental protection. The campaign includes, among other initiatives, the publication of this updated edition of the brochure on “Geothermal Energy: Yesterday, Today, Tomorrow” that UGI had published in September 2006. The publication retraces the ancient and recent milestones in the utilization of geothermal heat and its by-products in our country and takes stock of the status of geothermal energy in the world and especially in Europe. It then describes the opportunities of development of geothermal resources in Italy by 2020, highlighting the very significant results that might be achieved (especially through direct use of geothermal heat) in terms of fossil fuel savings, as well as environmental and economic benefits.

As is obvious, the Italian Government and all the Institutions involved in energy issues should become aware of this option and resolutely foster its development. It is with this expectation that UGI and CNG commit to promoting the development of all possible uses of geothermal energy, and are willing to cooperate with all authorities in charge of energy matters in order to provide them with technical support in formulating policies to develop this unique energy resource.

The President of UGI
Giancarlo Passaleva

(Warning: the file has 18MB size, it's strongly recommended a broadband connection)